Holsters that are specifically designed for athletic activities like jogging, especially concealed carry holsters, are subject to some practical requirements that other holsters don’t necessarily need to meet. For example, concealed carry holsters that are designed to be worn with casual attire don’t necessarily need to have the slim profile needed for jogging holsters. In addition, the layout of typical holsters is not suited to concealment under movement intense situations such as jogging, running, biking, or other athletic activities. 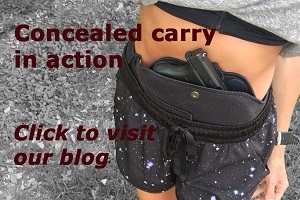 To put this into more concrete terms, consider, for example, the clothing that most people wear while running or jogging. During the cooler months of the year, concealment is easier, since more people would be wearing sweatshirts or other baggier, warmer clothes. However, come the warmer months, when people shed the layers, they might only be wearing running shorts and a loose t-shirt while running outside.

Many typical belly band holsters, which are fairly popular among athletes, allow the handgun to touch the user’s body and they do not breathe, which encourages sweat, thus rendering them very uncomfortable when the wearer is running or jogging. None of these liabilities noted that are common to typical holsters is acceptable for a jogging holster.

In addition to these concerns, some concealment holsters do not adequately secure the firearm when the person wearing them is running. This is an unacceptable safety infraction. Safety is the number one priority in any holster, whether for concealment or open carry.

Anyone looking for a jogging holster that mitigates or eliminates the performance problems mentioned above should investigate some of the innovative concealment holsters available at PistolWear.com. Developers of the groundbreaking PT-ONE, PT-2, and Lady Defender Concealment Holsters, among others, the makers at Pistol Wear settle for nothing less than the best in the holsters they design and test.

Some of their concealed carry holsters like their PT-ONE and PT-2 Concealment Holsters are designed with the needs of athletic wearers in mind. They are made from high-quality, ultra-premium materials, will not roll, bounce, or shift on your body when worn properly, and they incorporate other comfort and performance-enhancing features. For example, they are made with a breathable belt to keep you cool and dry during periods of exertion, as well as with a perspiration barrier to minimize sweat contact with the firearm. They are soft and comfortable yet they have a rigid outer wall to further protect the firearm and to eliminate printing.

To learn more about these innovative holsters for running that are well-designed for concealed carry during athletic use, visit pistolwear.com. There you can learn more about each of their unique offerings – and if you need more information, you can contact them directly at 1-918-289-2976.

Provide Better Cushioning for Your Feet With Good Insoles

Unorthodox Vintage Coffee Table Ideas You Have to Try