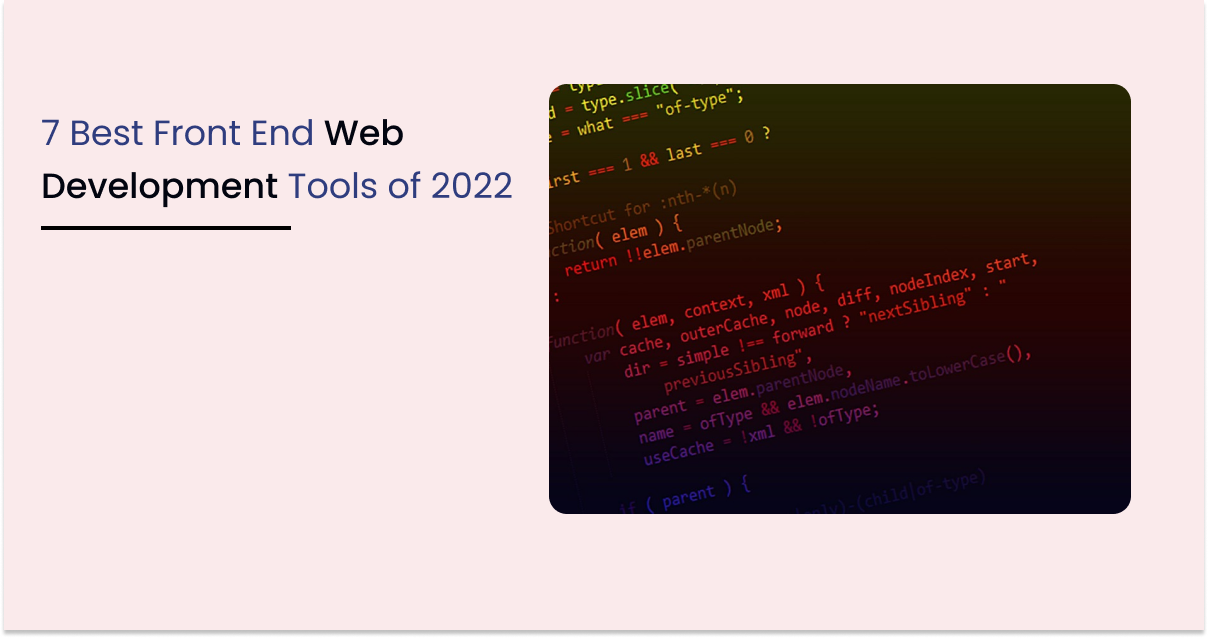 Front-end web development is an ever-changing industry, and it can be hard to keep up with everything that’s going on, especially since things like design trends, programming languages, and new frameworks are constantly being created and improved upon. In this article, we will look at seven of the best front-end web development tools of 2022 in order to give you an idea of what to expect over the next few years and help you decide which tools will be best suited to your needs as a web developer.

Designed by Twitter and made freely available, Bootstrap is a sleek and simple CSS framework that can instantly give a website a facelift. While it doesn’t have any functionalities of its own, it does provide quick access to UI elements like modals and tooltips. Since designing an interface from scratch takes time and effort, Bootstrap is often considered a must-have for any web development project. It’s also worth noting that Bootstrap has been around since 2011—and will likely be around for years to come.

Founded in 2012, Foundation is one of those companies that’s just so cool that they didn’t even bother to come up with a clever name. Founded by ZURB, Foundation was made to help teams build websites and apps faster and easier. It comes with over 1,000 web-optimized features that work perfectly on phones, tablets, and desktops. In fact, its responsiveness is what makes it one of our picks for 2022. Just for fun (or convenience), you can also use Foundation to mock up your designs without having to use another program.

If you’re not looking to build your entire application with static sites but still want to cut down on some initial load time and dependencies, Gatsby is a powerful choice. The tool allows you to create progressive web apps (or PWAs) which are pages that behave like mobile applications. They load quickly and are updated via service workers that push updates in real-time without refreshing. Gatsby builds on top of React and enables it with sensible defaults out-of-the-box. It has many other useful features too such as deep-linking, inlining critical CSS (for even faster initial load times), code splitting, ES6 support, hot reloading for assets like SASS/LESS/CSS, etc. And it’s all open source!

First released in 2013, React quickly became a favorite among front-end developers. Its library uses a virtual DOM to make pages more interactive than ever and create single-page applications (SPAs). This means users no longer have to reload their page if they want to see changes or updates. Since Facebook supports React, it’s likely that we’ll see even more features emerge over time. Facebook also created React Native, which makes cross-platform app development easier than ever before—even for those without web development experience. There are a number of other great tools on our list too: GruntJS, Bower, and Gulp are just three of them! Happy coding! Hire React Js Developer.

Although its popularity has declined over time, AngularJS is still a powerful choice for creating web applications. It allows developers to create reusable web components that can be extended by other developers. This framework is particularly easy to learn and use, making it a great option for beginners. AngularJS also boasts incredible support, as well as an active community that can help you with any problem you may encounter. Because of these features, combined with its unique capabilities, AngularJS continues to hold a place in the top rankings for front-end development tools . . . at least for now! Hire Angular Js Developer.

This is a popular platform for developers to create cross-platform desktop apps with JavaScript, HTML, and CSS. Electron combines Chromium and Node.js, two very popular open-source software packages. Based on Electron, you can easily build beautiful desktop applications that work on macOS, Windows, and Linux. If you are new to web development but want to learn how to make web apps for browsers or desktop apps for multiple operating systems at once then you should definitely check out Electron.

At its core, Sass is a CSS preprocessor. With Sass, you can use variables, nested rules, and other tools to make your stylesheets easier to read and maintain. Sass files are just plain CSS files—the preprocessor just reads them as it parses standard CSS. Because of that, when browsers finally support native variables, nesting, and more in CSS itself (which they’re starting to), you’ll be able to take advantage of those features too.

Is Modafinil effective for ADHD?

Why Is Network Cabling Important?

How To Calculate ROI Of Manufacturing ERP Software

Choosing Products for Your New Home